The History of Laws on Cellphone Use While Driving

By: Anupriya Basu
In: History of Laws, Laws 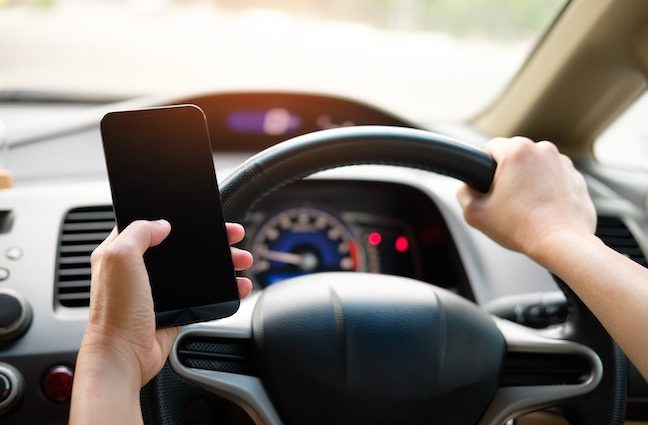 Many times you notice someone driving slower than others because they are hysterically typing a text message on their phone.

Doesn’t that make you mad? After all, what text message could be so important that someone would risk their life for it?

Using mobile phones while driving is a common practice among motorists, and while you may think you’re good at multitasking, distracted driving can be extremely dangerous.

In the year 2017, around 3,166 motorists died in accidents due to distracted driving according to the National Highway Traffic Safety Administration. This accounted for 8.5% of the overall number of fatalities in that year.

Because of the risks involved with cell phone use while driving, many states have now banned texting and calling while driving. Plus, most states suspend the licenses of teenagers who are caught using their mobile phones when driving.

Let’s look at some of the laws with respect to cell phone usage in effect today:

Although the history of driving laws date back to the beginning of the 19th century, cell phone usage laws were rolled out first in the year 2001, a time when cell phones started gaining popularity across the globe.

John Senders, a research scientist, conducted a driving study in 1963 to assess how long a driver needs to focus on the road for driving effectively.

Believe it or not, for this study, he drove into midday traffic on I-95 in Massachusetts wearing a sandblasted helmet that would cover his eyes for a few seconds every now and then.

As a result of this study, Sanders noted down a couple of distractions that a driver can face while driving such as road hypnotization, looking at the rearview mirror, conversations with fellow passengers, and enjoying the view outside.

At that time, he had no idea how much cell phones would distract drivers.

In 1997, much after cell phones were launched, the National Highway Traffic Safety Administration (NHTSA) conducted an intensive study on the effects of cell phones on driving. In the survey, it was found that 9 out of 10 people use cell phones while driving.

After a couple of studies and observations by law enforcement officers, different states began working on laws to limit the use of cell phones while driving.

Any guesses about which state was the first one to bring a law banning the use of cell phones while driving?

It was New York.

Back in 2001, the state of New York initiated a bill in its Assembly to ban drivers from talking on mobile phones which passed with a whopping majority of 125-to-19 votes. More than 41 states had proposed similar bans in the preceding years but had failed to make it a law.

But obviously, implementing a cell phone ban law wasn’t easy and state legislators witnessed a slew of roadblocks in their attempt to promote safe driving.

The biggest impediments to the implementation of the cell phone ban law were the lobbying groups represented by wireless telephone companies who reasoned that mass education campaigns would be more successful than a complete ban.

Many Republicans in the Assembly raised questions about the distractions caused by cell phones versus other things such as talking to children or listening to the radio. Others noted that it’s not possible to legislate distractions while driving.

Part of the reason for the protests against the law was lack of research proving the influence of cell phone usage on accidents. In fact, in a traffic accident study conducted by AAA, it was found that fiddling with the car’s radio caused more accidents than talking on cell phones between 1995 and 1999.

What Led to the Cell Phone Ban in New York?

Interestingly, a few counties in New York–Nassau, Suffolk, and Westchester–implemented local bans on cell phone usage. This prompted Verizon to fight for statewide legislation rather than working around a set of local laws.

The idea to ban cellphones got a further boost when a poll published by the Quinnipiac University proved that 87 percent of the voters in New York supported the law.

To some people like Assemblyman Felix Ortiz, the enactment of this bill was a personal victory as he had been proposing the bill since 1996 after witnessing an accident caused by a distracted driver talking on a cell phone.

Though there weren’t any statistics in those days to prove that the bill would save lives, supporters in the assembly were convinced about the fact that cell phone usage causes distractions and has led to fatal accidents in the past.

As of today, twenty states and DC ban drivers from using hand-held mobile devices while driving.

Other states that banned the usage of cellphones/communication devices during the same time:

When was the Ban on Texting Initiated?

These days apart from talking on cell phones, people engage in texting, browsing the web, as well as watching videos while driving.

In the early 2000s when states started enacting laws to restrict cell phone usage, texting or other related distractions weren’t a problem because people mainly used phones for calling.

But, slowly, it was realized that texting was a bigger menace than talking on phones, which is the reason it’s now banned in 48 states and the District of Columbia.

The US Department of Transportation’s National Highway Traffic Safety Administration also released a video to talk about the dangers of texting.

Restrictions on text messaging were first found in the hand-held cell phone laws of Connecticut and the District of Columbia around 2005.

In January 2008, Washington became the first state to enact a law that banned texting for all motorists while driving. After that, many states enacted similar laws.

The Curious Case of Cell Phone Usage Among Young Drivers

Despite a complete ban on cell phone usage for young drivers in 38 states and the District of Columbia, young drivers seldom comply.

In a 2009 study by IIHS, it was found that around 45% of drivers in the age group of 18-24 years use cell phones for texting while driving in states that ban the practice.

Further, as per a recent study by the AAA Foundation in 2015, distractions contributed to 58% of teen crashes and cell phone use was the topmost distraction.

Most of the states also feature detailed teen safety guides on their DMV websites and have parent-children agreements for young drivers.

When the laws restricting cell phone usage were being discussed, many legislators felt that drivers could be just as distracted from eating or talking to their kids. So a ban on cell phone usage would not reduce the number of accidents.

At that time, some people also felt that it would give police officers just another chance to stop and ticket motorists.

However, over the years, enactment of these laws have made a huge impact, and the use of cell phones while driving has gone down considerably from 2008 to 2017:

However, it’s difficult to assess the direct impact of cell phone use on accidents because people rarely admit that their distractions led to an accident.

As per a survey published by the Consumer Reports National Research Center in 2013, laws that prohibit the use of cell phones were found to be effective. 71% of those surveyed said that they have reduced the use of cell phones while driving. More than 50% of these respondents even mentioned that they have reduced their usage because of new state laws.

Another study by HLDI found that although state laws regarding distractions have reduced the use of phones, they haven’t made an impact on the crash rates.

The time frame of 20 years isn’t enough to actually see the impact of a law on the safety of drivers especially when the use of cell phones remains highly unreported. But the fact that texting takes your eyes off the road for 4.6 seconds, which is about as long as it takes to cover a football field in your car, should be enough to prove that it leads to distractions and can be fatal.

2019-11-19
Previous Post: Representing Yourself In Court Step-by-step
Next Post: Do you know why I pulled you over? The Famous Question Explained